Who We Are, The Start of The Travelling Pug
About Us 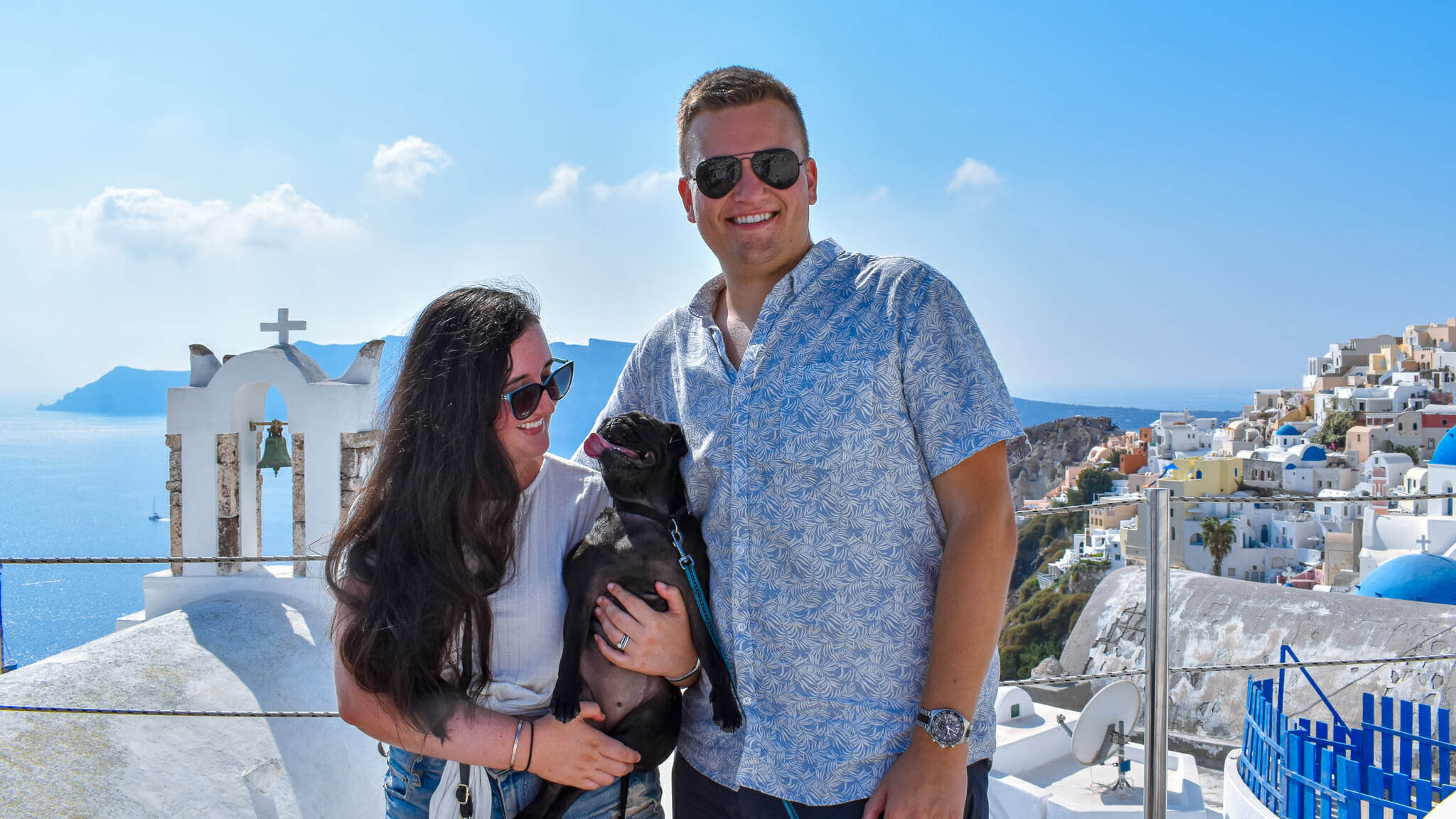 This is the first ever blog post on thetravellingpug.com. Do I start it with hi?! Hi my name is Pebbles The Travelling Pug. Just kidding, it’s her mother Abbey. I have yet to meet a dog that can actually type but please let me know if one exists.

I guess we’ll start with me. I’m Abbey, a 25 year old from South Wales. I am a born and bred Welsh person although my Irish dad would disagree. I travel the world with my husband Hugh (also 25 and from South Wales) and our 4 year old pug Pebbles.

Hugh and I met during the last year of sixth form, introduced by a mutual friend at a party Hugh was hosting. We had actually met twice prior to that but Hugh doesn’t remember, which confirms my account of those occasions as he had blanked me!

After we finished school, Hugh continued to run the marketing business he’d set up in 2012. I went off to university to study medicine. We had assumed we would live a pleasant life in Wales, him running the business and me being a doctor. That didn’t happen.

We first went on holiday together in June 2015, to Rhodes, an island in Greece. That summer we also spent a few days in Berlin, a week in Malta and a weekend in Amsterdam.

And so our love of travel began.

Following that, we started taking what ended up being almost monthly city breaks to various places in Europe. Because I was still in university we decided to make the most of the long summer. In January 2015 we booked a six week long, round the world trip. It was round the world in the sense the flights we took did a lap of the Earth. This was my first time ever leaving Europe so as well as being a little scared, I was very excited. Our adventure took us to the UAE, Australia, USA and Iceland before returning to the UK.

I was expecting a bit of post-trip depression when we got home. I didn’t expect that that would actually lead to me changing my entire life plan. We got back a few days before I was due back at university to start my fourth year of medicine. After a few days back, I realised I couldn’t do it anymore. It wasn’t a life I wanted to lead – I wanted freedom and adventure.

As fate would have it, I had spend a lot of my free time helping Hugh grow the business. Unknowingly I was learning the ropes of what he did along the way. So, after deciding I was going to withdraw from my course, we started working together. Now that’s what we do as joint owners and what has allowed us to fund our life.

From then to last spring, Hugh and I spent chunks of time travelling, followed by chunks of time at home. Pebbles came into our lives in September 2015 at 10 weeks old. Whenever we were away she would stay with my awesome parents, enjoying a little trip of her own (her nanny likes to give her way too many treats!).

74 countries later we decided we had had enough of that lifestyle. We were sad every time we had to leave Pebbles, but sad every time a trip came to an end. We realised the lifestyle we were living wasn’t sustainable. So on a bright April’s day, whilst out walking Pebbles, we decided that now was the time to travel with her by our side.

Weighing everything up, we decided to take a tester trip first to see how we all coped, especially Pebbles. We decided on four months exploring Europe for two reasons:

A few weeks after making that decision, we were on our way. We took the Stena Line from Harwich to Hook of Holland. We decided on a nighttime sailing so Pebbles could sleep the entire way as dogs have to travel in the kennels. The following day we arrived in the Netherlands, ready to head to Rotterdam for 3 days before taking another big step – our first flight. We flew from Rotterdam to Dubrovnik with Transavia. From then we managed to get to 25 countries before returning home at the end of October.

As I’ve mentioned, this was a test-run to see if we would be able to do it long term. And boy did we realise it was what we wanted to be doing! It wasn’t just Hugh and I that were miserable to be returning to the cold and damp UK winter. Pebbles was sad too. So, we set about planning what to do next. We’d always thought the Americas seemed the next logical step after Europe based on distance and dog-friendliness. In January 2020 we flew from Gatwick to Toronto on a one-way flight to explore this part of the world. I’m writing this whilst sat in Mexico where we will be for another month before heading to Costa Rica. After that, who knows what’s in store for us!